The longevity of the world's oldest woman, Maria Esther de Capovilla from Ecuador, was put firmly down to the wonders of donkey's milk. Mrs. de Capovilla passed away last week at the ripe old age of 116.

Olivier Denys from Belgium's only donkey milk farm, the Asinerie du Pays des Collines at the Château des Mottes, said that he was surprised by the revelation.

"We know that donkey milk is very good for your health, for the digestion and intestine, but we hadn't heard that it extended lifetimes,"​ he said.

As well as its healthful properties, donkey milk is also imbued with qualities that mean it is excellent as a base ingredient for a host of skin care products.

The rich composition of donkey milk means that these products are regenerative for the skin because of high levels of protein, phospholipides and ceramides, which in turn confer it with both soothing and restructuring properties.

Its rich composition also makes it an excellent moisturiser and, perhaps more importantly, it is said to be an effective anti-wrinkle treatment.

The milk also has 60 times the vitamin C content as cow's milk, Denys said, as well as containing vitamins A, D and E, and is a rich source of calcium and phosphorous, making it highly beneficial, both for consumption and skin care applications.

These properties could all help to boost the future profile of donkey's milk in the cosmetics market, particularly in view of the fact that demand for natural ingredients is one of the industry's fastest growing areas.

There are a handful of companies that currently manufacture cosmetics based on donkey's milk. Another leading player is the US-based Cleopatra brand, which includes a number of skin care products, including a day and a night cream.

Like Denys' skin care range, it is marketed worldwide as a premium natural skin care product, albeit serving a highly niche market. And given the recent spotlight on donkey's milk, demand for the ingredient could be given a significant boost.

However, one limitation to meeting increased demand might be low milk yield rates. A donkey gives about two litres of milk per day, over three milkings, while a cow can churn out 40 litres in a single milking.

And despite having 84 donkeys in his drove, Mr. Denys revealed that only about 15 jennies are ever on active milk duty.

"It's niche,"​ he said. "But our production goes up every year, and the market is expanding."​ 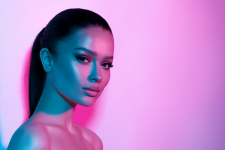