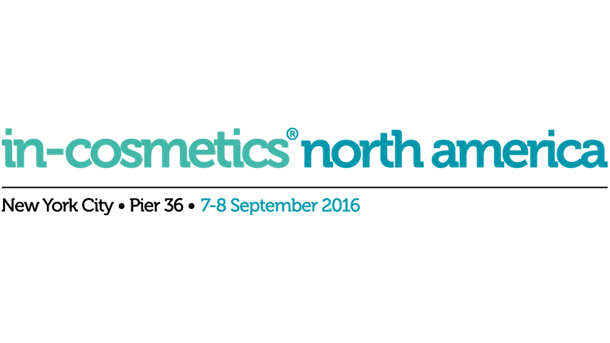 The cosmetics industry is going through a period of intense innovation. With researchers now having a detailed understanding of the molecular pathways that lead to aging and knowledge of what gives natural products biological activity, ingredient developers are better equipped than ever to make science-led breakthroughs. The results of these trends are on display at in-cosmetics North America.

Anyone walking the exhibition floor at in-cosmetics North America will quickly discover how scientific breakthroughs, both in terms of understanding of our own bodies and the world around us, are shaping the next generation of cosmetics ingredients. Today, researchers pair a clear understanding of the biological pathways that underpin every wrinkle and age spot with the ability to create, or derive from nature, ingredients that interact with these processes to reverse signs of aging.

The outputs of this way of working are evident across the in-cosmetics North America exhibit hall. At one booth a company will discuss how researching the epigenetics of bee colonies led to a way to accelerate tissue regeneration. Nearby, another ingredient developer will explain how knowledge of the traditional uses of a plant in India resulted in a product designed to counter aging by regulating cell differentiation in the epidermis.

Here, in anticipation of the first ever in-cosmetics North America, we profile some of the innovative products attendees will see at the event.

Recent research at Mibelle Biochemistry neatly encapsulates the trends that are shaping the creation of the next generation of cosmetic ingredients. The story starts 9,350 km away from Mibelle's base in Buchs, Switzerland, on a different continent and in a field of research far removed from cosmetics. There, in Toyama, Japan, a researcher discovered the protein and molecular mechanism that causes queen bees, which have the same genetics as their worker siblings, to develop as they do.

The discovery, details of which were published in Nature​, showed a 57-kDa protein in royal jelly acted on gene expression in a way that caused bees to grow larger, age more slowly, live 10 times longer and be more tolerant of environmental stresses. In Buchs, Fred Zülli, managing director at Mibelle Biochemistry, and his team saw this discovery as more than just an interesting insight into the lives of bees. To them, it represented a jumping off point for research into skin regeneration.

“We started to look at the function of the royal jelly and how it works. Through that, we identified that a protein plays a major role” Zülli said. “We mimicked the function of this protein with a peptide, and we found this peptide induced some epigenetic-like effects in the skin.” Epigenetics is the term for the modification of gene expression without altering the underlying DNA, such as happens when an ordinary bee is turned into a queen through the ingestion of royal jelly.

The peptide identified by Mibelle is RoyalEpigen P5. Using in vitro​ assays, Mibelle has generated data to show the peptide has the capacity to stimulate the proliferation and migration of cells, a process it claims improves tissue regeneration. Through this mechanism, Mibelle thinks RoyalEpigen P5 can help skin cells to regenerate despite being exposed to an aging environment. Mibelle has also linked the peptide to proteasome stimulation, a process that supports protein turnover.

With the proteasome stimulation suggesting RoyalEpigen P5 can make skin tone more even, Mibelle advanced a formulation based on the ingredient into placebo-controlled clinical trials designed to assess its effect on skin renewal and smoothing. According to Mibelle, the 28-day smoothing study associated RoyalEpigen P5 with improvements in complexion uniformity in women with uneven skin tones. The other study linked RoyalEpigen P5 to a reduction in skin renewal time.

In both studies, Mibelle used a 2% RoyalEpigen P5 cream formulation. The formulation developed by Mibelle incorporates the peptide into a shea butter-based soft sphere carrier system. “This helps to improve the bioavailability of the peptide,” Zülli said. “The delivery system is a nanoemulsion, so it's liquid, milky and can be easily formulated into the water phase of cream.”

While the details of the RoyalEpigen P5 story are unique to it, the scientific trends behind its development have parallels across the exhibition hall at in-cosmetics North America. The Serdex division of Bayer Healthcare, for example, will be at the event to showcase Taladvance, a product that, like Mibelle’s RoyalEpigen P5, is the result of research that looked to nature for insights into how to manipulate the biological pathways that cause aging of the skin.

In the case of Taladvance, Serdex looked to Centella asiatica​, a herbaceous perennial plant, for ideas about how to improve skincare through modulation of pathways in the dermis and epidermis. The plant has a long history of use in traditional medicine, notably the Ayurvedic healing system practiced in India. Researchers have previously identified the asiatic acid, madecassic acid, asiaticoside and madecassoside produced by the plant as being some of the sources of its therapeutic properties.

A titrated extract of Centella asiatica​, also known as TECA, has a long history of use. Serdex produces TECA for use in substances to improve stretchmarks or treat acne, but, by extracting molecules other than the triterpens asiaticoside, asiatic acid and madecassic acid, the Bayer division thought it could create a product with different properties. The result is Taladvance, an ingredient that contains polyphenols and triterpens in a similar ratio to that which they occur in Centella asiatica​.

Serdex thinks Taladvance acts on the skin in two notable ways. In the epidermal region, Taladvance is thought to stimulate expression of IGFBP3, a gene that encodes for insulin-like growth factor-binding protein 3. In doing so, IGFBP3 maintains epidermal homeostasis. The second mechanism of action takes place in the dermis, where tests suggest Taladvance boosts metabolism and cell maintenance capacity. Sedrex sees anti-aging, epidermal balance and dermal boosting applications for Taladvance.

While the inspirations for RoyalEpigen P5 and Taladvance differ, as do their mechanisms of actions, they are united by a shared approach to the discovery of ingredients with anti-aging properties. In both cases, the researchers behind the anti-aging products drew heavily on our growing knowledge of biological pathways and traditional therapies.

The breadth of innovation today​

Mibelle and Serdex will be joined at in-cosmetics North America by other companies with similar narratives. Safic-Alcan, like the two aforementioned businesses, will be at the event to showcase an ingredient designed to modulate the expression of genes linked to aging.

Having assessed the effect of its product, Dextralip, using reverse transcription polymerase chain reaction and a human dermal fibroblast model, Safic-Alcan has data to suggest the ingredient alters the expression of three genes. The affected genes encode for the proteins cyclin D1, GADD45 alpha and p63. These proteins are involved in cell renewal and DNA repair, leading Safic-Alcan to conclude Dextralip’s dose-dependent effect on their expression can have a positive effect on the health and appearance of the skin.

Safic-Alcan drew similar conclusions from other proposed mechanisms of action for the ingredient. In vitro​ tests suggest Dextralip inhibits secretion of PGE2​ and expression of COX-2, both of which play a role in inflammatory pathways.

When paired to the aforementioned effects on expression of cyclin D1, GADD45 alpha and p63, Safic-Alcan sees the interaction of Dextralip with PGE2​ and COX-2 as evidence the ingredient addresses multiple steps in pathways that cause ultraviolet light, pollution and other environmental stresses to result in aging of the skin.

Other companies, such as RO.EL.MI., are trying to address the issue of stressed skin using ingredients aimed at different pathways. The focus at RO.EL.MI. is cell signalling via CD44, an antigen. From its position in the surface of cells, CD44 facilitates an array of cellular processes, leading RO.EL.MI. to develop ingredients designed to mimic some of the interactions it is involved in. The result is a line of products dubbed HaTech 2.0 Hyaluronans.

Attendees at in-cosmetics North America will have the chance to evaluate the merits of these and many more products. Mibelle, Serdex, Safic-Alcan and RO.EL.MI. will be joined at the event by more than 150 other exhibitors, enabling attendees to talk over the space of two days to all the companies that are redefining how cosmetic ingredients are developed and what they can achieve.

As the above snapshot of activity in the ingredient sector shows, companies are evolving their discovery and development practices in response to an increasingly detailed picture of what makes us age. The upshot for manufacturers is the scope of what is possible — and the scientific case in support of advances — is expanding at a rapid pace.

Faced with a fast-changing market, it is more important than ever for manufacturers to stay abreast of developments and understand how they represent opportunities, or threats, to their businesses.